“Partners” – we need each other 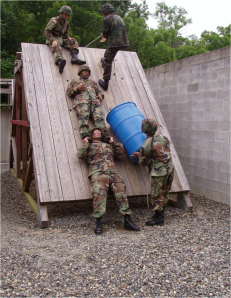 All athletes, regardless of their sport, know the value of partners. Even if we’re into individual sports like downhill skiing, marathons, tennis, etc., we need others to coach us, to encourage us, and to hold us accountable. Indeed, one of the reasons so many of us struggle with being consistent in our training and exercise routines is the lack of a partner. They may not be able to help us every day in every way, but it makes a big difference when they are there.

Let’s use this analogy of sports (as Paul often did) as we think of God’s relationship to His people. For example, in many ways, Jesus acts as our personal trainer and agent. He gives us direction, pushes and supports us, and represents us. But He is also the Owner of our team. We owe Him and fellow Christians our best because we belong to Him (Romans 13:8). But we don’t always play well with others, do we?

In 1994, with 1.8 seconds left in the third game of the NBA Eastern Conference semifinals, the Chicago Bulls and the NY Knicks were tied 102-102. Coach Phil Jackson called a timeout to give his team the last play. Rookie Toni Kukoc had been playing a great game, so Jackson told the team to get the ball to Kukoc. But Scotty Pippen (who was also one of their best) became so angry that he refused to play. What happened? Jackson benched Pippen; Kukoc made the shot; and the Bulls won the game. But let‟s not judge Pippen too quickly. Haven‟t most of us been ball-hogs in some key play?

What can we learn from Pippen’s poor choice? First, none of us can act like a free agent on God’s team. Second, God will always win, whether we decide to play or not. And third, the rebel only misses out on the glory of the team’s victory. Remember Mordecai‟s counsel to his niece in Esther 4:11-14?

Even so, such an emphasis on working with others often seems to go against the Western values of independence, the Maverick spirit, climbing the ladder of success, being #1, etc. For this very reason, my wife and I chose Ecclesiastes 4:9-12 as the text for our wedding service. We want to focus on interdependence in Christ, not independence. Both of us grew up in families that produced go-getters, but looking back, we wish we had been closer in our families. My parents were business partners in a family lake resort, so as my brothers and I grew older they gave us more responsibilities and input on how to run the business. I am eternally grateful for their great witness of integrity, commitment, and service because of their love for Christ. But the busyness of our business kept us from knowing each other more intimately.

Yes, we did partner to work shifts. Each parent managed the store, apartments, etc. while my brother and I worked the gas dock, fishing pier, boating area, etc. But there was just too much work for all of us to spend time together, and we didn’t have the money to hire other workers consistently. Again, I am grateful that God used my parents’ example and encouragement to develop a great work ethic and spirit of individual initiative in me and my brothers. But I have also struggled to learn how to be more interdependent and intimate.

One of my pet peeves from our family business is still issues of responsibility. I want to know my responsibility and the other person’s so I figure out how to “succeed” (or blame when I don’t succeed). But Galatians 6:1-5 gives us God’s perspective on teamwork. First, Paul reminds us that our “business” is the growth of all believers in our relationship in His Body. Again, contrary to many cultural values, we are not called as individuals to stand out as better than other believers.

And we’re certainly not to ignore others needs or climb over them to get what we want. But I get tired of helping others who should be doing better, don’t you? So, knowing that we’re tempted to personal pride and complaining, Paul writes begins the passage with the words, “ye which are spiritual (i.e., not more concerned in pleasing their own fleshly desires) restore such a one in the spirit of meekness; considering thyself, lest thou also be tempted.”

What is my responsibility and what is theirs? The answer is in Paul’s reference to “burdens” in verse 2 and verse 5. The first term is (baros) in Greek (the original language of the New Testament). It pictures a weight, usually heavier than one can bear. The second term, (phortion), is where we get our word “portion”. It refers to the inventory of an individual’s task, like a Soldier’s rucksack with a specific inventory of items for which they are responsible to carry into war. Jesus calls each of us to help others when they are overwhelmed and to carry what He has given us individually.

As I noted in an earlier devotional on “genes”, God created each of His children with unique abilities and even different measures of faith. He expects each of us to carry our load and to work together bearing each other’s burdens. When and where do you need help? How might He call us to help someone or ask for help when one of us is buckled under too much weight?

Like Loading...
This entry was posted in Workout Wednesdays and tagged devotional, partners, W.A.I.T. training devotional. Bookmark the permalink.