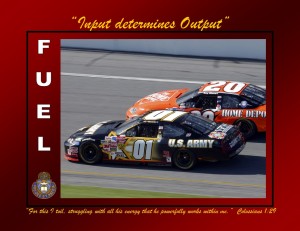 Don‟t you hate it when reality jumps up and slaps you in the face? Maybe you’ve been there. Things seem to be going so well – it’s almost as if the laws of the universe don‟t apply! But eventually, those same laws – in my case, the laws of the digestive system – eventually bring us back to earth.

In my first deployment to Iraq, I was doing a lot of regular, intense PT. Like most Soldiers, I used PT to help me adjust to the weather, to burn stress, and to keep my mind off the
dangers around me and the life I was missing back home. On one such day, I worked out so long that I missed lunch before I realized it.

I was pretty hungry, but supper was still hours away. So I went to the snack section of the dining facility and scraped together a PB&J. The sugar rush felt nice, so I chased it with an ice cream. Life was good! Then, two hours later I lined up for chow. I had been trying to eat earlier so my food would have more time to digest and not gel around my waist – but not that night.

We were having gyros, with that special Greek sauce that I love! And they were great, but I probably had one too many. Well, maybe I had three too many. As you can imagine, I didn’t sleep very well that night. Still, the next morning I got up as usual for my morning run.

Nothing felt usual though. I stretched for about 10 minutes until I realized that I wasn’t going to feel better magically. So I just decided to suck it up and get started. I was about two miles into my run and “WHAM!” – my stomach locked up on me. Oh, the pain!! “What an idiot!” I wished that I could’ve turned back the clock a few hours. If I had only waited and exercised some self-control, I could’ve fueled up a lot differently.

Isaiah 55:2 warns us against fueling up on things that cannot satisfy. But the calories and fat in the PBJ, ice cream, and Gyros weren’t the real problem. Sure, that much rich food
wasn’t good for me. But if I worked hard enough, I could burn that off – eventually. My real problem was in turning to physical things to satisfy a craving in my spirit.

Yes, initially, I felt a physical hunger, but the peanut butter & jelly satisfied that need. Looking back, I had the ice cream because I wanted to feel rewarded for my workout. Also, the past few months I had been a little depressed at a missing my family and not making much progress in ministry, but the gyros reminded me of Germany where I had my first gyro – where I had felt good about my time with my family and my accomplishments. Contrary to popular belief, men can be guilty of emotionally eating, too!

Good fuel helps us meet our real needs. But the flood of fat and sweets hindered my needs: my sleep, my PT, and my concentration for the day. What if I had fueled up by chewing on God‟s promise to “work all things for the good to them that love God, to them who are called to His purpose” (Romans 8:28)? Can you imagine being sluggish or distracted from
taking in too much encouragement in Christ?!  We need to ensure that we‟re getting the good stuff. But proper self-care is not our natural tendency. Take water as an example.

As a grown man I got really tired of hearing others remind me to “drink water!‟ in Iraq. Still, just a little later in the same deployment, I became mildly dehydrated, and I felt pretty stupid. Again, I had been working hard on my PT. But this time I had been making almost no progress. My run time was slower, and I was weaker in the weight room. Then, after  a sudden rise in the heat, everything magically changed! I started drinking several big bottles of cool water for a few days – not because I thought I was dehydrated – just because I was a little warmer than I wanted to be. And “out of nowhere” I began feeling a lot better. I had more energy; I was more alert during the day; and I slept better that night. The next day, I went for a run, and I felt as if I could’ve run forever! What made the difference? Water!

Water helps our blood carry nutrients and oxygen to our muscles, enables our electrolytes and brain synapses to function properly, and assists our stomach acid to break down our food. We need water to live! No wonder Jesus called Himself “living water” in John 4:10-38! When His Spirit flows in us, He clarifies our thoughts, strengthens our wills, and enables us to grow.

How‟s your intake of God‟s Word lately? Do you crave Him as the deer pants for the water? (Psalm 42:1) Think about some of the spiritual and relational implications of what you’ve just read: because Jesus is our living water, we are to “drink in His Word‟ and crave His Spirit. As our bread of life, we are to chew over His Word to give our souls the nutrition and strength to function properly.

We are to swallow even the hardships that He ordains for us to break down the stubbornness inside us. Only by taking in all of Him will we have what we need to live. Isn’t this the very picture of Jesus in the Lord‟s Supper?

Watch God‟s creation. Where are you turning for fuel?
Accept that He made you for Him, not the world‟s junk food!
Invest in His Kingdom by “feeding” well (John 4:14 & 6:36).
Team with others who have the same appetite for Christ

And if you want to receive similar articles, you can subscribe to tools4trenches.