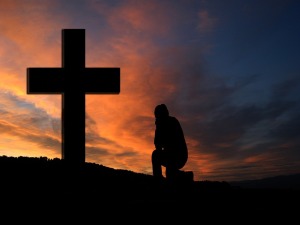 Last week we started looking at a three-dimensional view of God’s love in “1 & 2 Chronciles (part 1 of 3):  the King of Eternity“.  You can refer to that article to see that one clear dimension of God’s love for His people is endless time because of Christ.

Today we’re focusing on another dimension of His love:  vertical joy because of Christ.  The New Testament is clear that those who follow Jesus by faith in Him have a secure relationship of celebration.  They are saved sinners on earth with their new Father in heaven because of the Mediator completely covering their sins and completely imputing His righteousness to them through His work on the cross and resurrection to rule over them.  Yet, other revelations in God’s Word are not as clear.

For example, we ended last week’s article with two notes of strange things that directly to relate to our certain relationship of joy with God.  1) The list of David’s military divisions in 1 Chronicles 27 seems out of place among the lengthy and explicit chapters describing the temple and the associated worship of the Lord.  Yet 2) the only sin of David mentioned in Chronicles is his census of those same military forces.

Again, anomalies in God’s Word are always to draw our attention to a clearer understanding of deeper truths in His Word.  King David’s military might was an historical fact, so it certainly fits in the Chronicles . . . for the very same reason that David’s census fits in this holy record of the King:  the sin of David’s census was in his thinking – even if it was a temporary thought – that his military strength had established his kingdom.  The Lord seems to have omitted David’s adultery with Bathsheba, complicit murder of her husband, Uriah, and further cover-up of his sins to show that He truly does not remember the sins of those who turn from their sins in genuine grief. (2 Samuel 12:1-13, Psalm 25:7, Psalm 51:1-19, etc.)  The Lord also seems to have included the listing of those military forces as one visible demonstration that our joy in Him is secure.  But the prominence of the temple in 1 Chronicles 22 through 2 Chronicles 7 shouts that our security is not in our military strength but in our mediating Savior.

At the risk of teasing you with next week’s conclusion of this series, God’s love in Christ is both vertical and horizontal.  His horizontal love is seen in His kings and other leaders’ care for others, but even that would not be possible without His foundational vertical love pictured in the temple.  And the temple is too full of beautiful nuances to fully cover here.  In order to keep this article relatively brief, I will only touch on a few to encourage your deeper and even more joyful reading of His Word.

In 1 Chronicles 28:3, the Lord tells David that Solomon, not David, was to build the temple, “…for you are a man of war and have shed blood.”  But what sense does that make?  Like the mobile tabernacle in the wilderness, the temple would become known for blood everywhere.  So we see a man of peace who will build a temple of blood.  We see a picture of Jesus, the Man of peace who became our bloody sacrifice and mediating Priest.  These are pictures of joy because they picture His heart of gentleness and strength to die for us, His innocence though led to slaughter for those who had rejected Him.  This is the Jesus we can trust to secure our joy.

1 Chronicles 22:6-19 outlines some of the beautiful and intricate detail of the temple.  It’s not a hasty contract of government housing – it’s a carefully  planned and skillfully crafted masterpiece.  So should we feel about God’s Word referring to each of His people and collective people as His temple? (1 Corinthians 3:9-17, 6:19-20, 2 Corinthians 6:16, Ephesians 2:19-21, etc.)  This reminds us that the Lord has careful plans and is skillfully crafting His people individually and collectively.  And notice in the New Jerusalem, there is no temple at all, because God and the Lamb meet celebrate with His people face-to-face forever. (Revelation 22:22-27)

Notice, too that 1 Chronicles 23-27 reveals a significant mass and detail of focus – not on the temple itself – on the people associated with work in the temple and guarding God’s temple and His people.  This is much more than a roster of labor.  The people of God are the reason He established His temple – to bring them into a secure relationship of celebration with Him.  For all we know, the materials of Israel’s tabernacle are long destroyed; Solomon’s temple was destroyed; and the temple that Herod rebuild was destroyed; but God said that His people were to be a “kingdom of priests” (Exodus 19:6) and the Lord Jesus clarifies that is to be “forever and ever.” (Revelation 1:4-6)

David’s charges and Solomon’s offerings in 1 Chronicles 28-29 emphasize that, as significant as the temple is, it is analogous to a church building:  it is the primary place where couples wed, study God’s Word and gather for times of sweet fellowship with other believers, dedicate their children to the Lord, lay the bodies of their deceased parents before the Lord, and more.  But its purpose is to facilitate those acts of worship and service that must also extend beyond the building, just as 2 Chronicles 1 shows King Solomon’s natural extension of service to asking God for wisdom to rule His people.  How much more should those who follow Jesus as the living Temple extend their worship beyond physical buildings of churches?

But we’ll say more about that next week in our conclusion of this mini-series.

The temple, its contents, and sacrifices have been the focus of entire commentaries, so I need to stop somewhere and will conclude with this, lest we miss it:  Hebrews 8:5 and 10:1 clearly tell us that every detail of the temple and its sacrifices were a mere “shadow” foreshadowing heavenly blessings that will not be fully seen or enjoyed completely until the Lord returns and takes His people to be with Him forever in paradise.  If you want to deepen your joy in the rich salvation of the Lord Jesus, I recommend a parallel study of Leviticus and Hebrews.  There’s a reason the flow of the 150 Psalms in God’s Word move as a roller coaster of emotion toward more and more praise:  the Lord saves His people for certain joy in Him.

Next week, we’ll conclude this mini-series by seeing how joy in the Savior above us always overflows into service to those around us.

If you’re interested in reading other posts from this series, “Satisfaction Sundays”, you can refer to the menu above.  You can also click on the following links for Understanding and Applying the Bible, inductive Bible studies on Philippians, or devotional videos on Jesus’ Sermon on the Mount.

Like Loading...
This entry was posted in Satisfaction Sundays and tagged summaries of Bible books. Bookmark the permalink.